Not a huge surprise from Mike DeCourcy

Why him: Michigan's past two stars, Trey Burke and Nik Stauskas, became Big Ten player of the year. LeVert will have stiff competition for that trophy, and it's going to be even tougher for the Wolverines to compete for the conference title given the exodus of proven big men Mitch McGary, Jordan Morgan and Jon Horford from the program.

LeVert could have as impressive a season as any recent Wolverine given the opportunity available to him and his own variety of talents. He is an excellent 3-point shooter (40.8 percent last season) and is a better ballhandler and passer from the wing than Stauskas, which is saying something. LeVert could be one of the nation’s best players.

What’s next: Carrying a load like the one LeVert will be asked to handle generally requires some strength. LeVert came to Michigan with a lean frame that has resisted rapid transformation. He has excelled without muscle, as his rebounding numbers attest.

But it could be argued that he wore down toward the end as he carried a 34-minute load through the season. He averaged only 9.2 points and shot 37.7 percent over the final five games.

maybe ballhandler but a better passer?

@Jakerblue Agree. Stauskas was the better passer last year. I think it’s a comfort thing within the offense for LeVert though.

I’d say LeVert was a better passer in transition and as a drive and dish guy. Nik is on another level in PnR, though.

Levert is a good ball handler but certainly not on the level of Nik. What Caris has that is superior to Nik is the ability to change directions/speed with his legs. His burst/acceleration/brakes is great

I'd say LeVert was a better passer in transition and as a drive and dish guy. Nik is on another level in PnR, though.

I know I’ve posted Caris’s crazy transition to half court A:T ratios before. He’s something like over 5:1 in transition and 1:1 in halfcourt.

Key will be for Caris/Derrick to create points for others off the PnR this season, not just for themselves.

I don’t even think Walton has tapped into his full potential. His combination of vertical speed, lateral quickness and ballhandling are a great combination. I think Derrick will be absolutely lethal in transition this year, especially considering he’s a great rebounder from the OG spot that can go coast to coast.

I don't even think Walton has tapped into his full potential.

Agree, and good thing he has Beilein to coach it out of him

By now, everyone has heard about — if not seen — the brutal injury that Indiana Pacers star Paul George suffered in a Team USA scrimmage that was played to help Mike Krzyzewski figure out who will be on the squad that will play in the Basketball World Cup later this month.

One of the major talking points after that injury was whether or not professionals should be allowed to play in major international basketball competitions, or if we should send our nation’s best collegiate players overseas to participate.

That got us to thinking: If collegiate players were to make up our national team, what would that team look like? Three notes: Karl Towns plays with the Dominican team so he was not considered; Buddy Hield is Bahamian so he was eliminated as well; and Emmanuel Mudiay’s eligibility for our team was erased when he decided against playing college basketball. Otherwise, he would have likely been our starting point guard.

G Caris LeVert, Michigan: To think that LeVert is even in a position to be considered for this spot is nuts given where he came from, but he’s earned it. LeVert is a 6-foot-6 guard that can hit threes and is capable of creating in ball-screen situations. He’s not as complete of a player as Ron Baker is, but he’s a better scorer and individual creator. 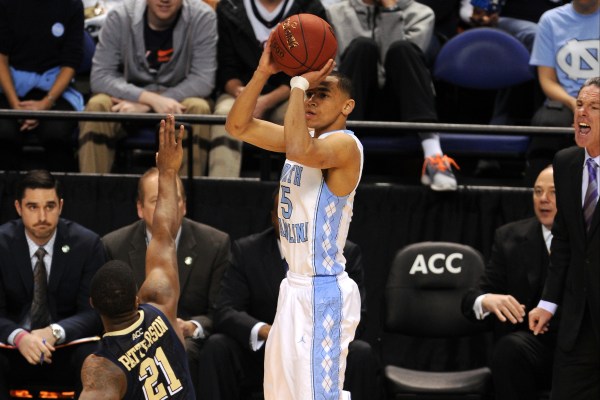 What would Team USA look like if it only used college players? -...

There has been a lot of talk about the future of Team USA after Paul George's injury. What would it look like with just college guys?