I’m proud to say that Joe is a former high school student of mine and so this gives me the ability to give him a hard time. So you’re right, Joe, that is a copout! I definitely think there will be a surprise or two. I’m hoping it’s in the direction of the mid-majors, but with the bid-thieving going on I’m afraid that has damaged Belmont and the So-Con team’s chances. Still, there will be some surprises, I hope!

I agree completely with what he says about the committee getting the bracket lined up regardless of the late championship game results. The easiest scenario is to drop us and MSU into the 2’s regardless of the winner of today’s game.

Gonna be reallllly interesting to see who the committee pairs with Duke out of Michigan State, Michigan and Kentucky

From what I’ve gathered the committee and media refuses to view us in the 1 seed talk with MSU, unc, Tennessee, Gonzaga, Kentucky because we didn’t obliterate the terrible teams on our schedule and didnt have high pre season ranking(created a eye test perception that um isn’t as good as those teams). FWIW Torvik actually ranks us number 1 against quad 1 and quad 2 teams. Since a 1 seed isn’t going happen, I just hope we get the 2 out west.

Yes, the SEC and ACC get all the hype from ESPN and CBS, Which leaves the other conferences scrambling for position. I do not like the B1G Championship game on Sunday…but they must be the marketing experts. This is always about marketing dollars to the masses IMO!

Haven’t ever really understood why UNC is considered to be a relatively uncontroversial 1 seed. I don’t see much to separate them from MSU or UM, unless you want to give them full credit for beating Zionless Duke twice.

Sorry if I missed it, but is there by chance a bracket challenge for UM HOOPS members?

29 ESPN contributors’ Final Four picks. As might be expected Duke has the most votes. How do people see us stacking up against the Zags? 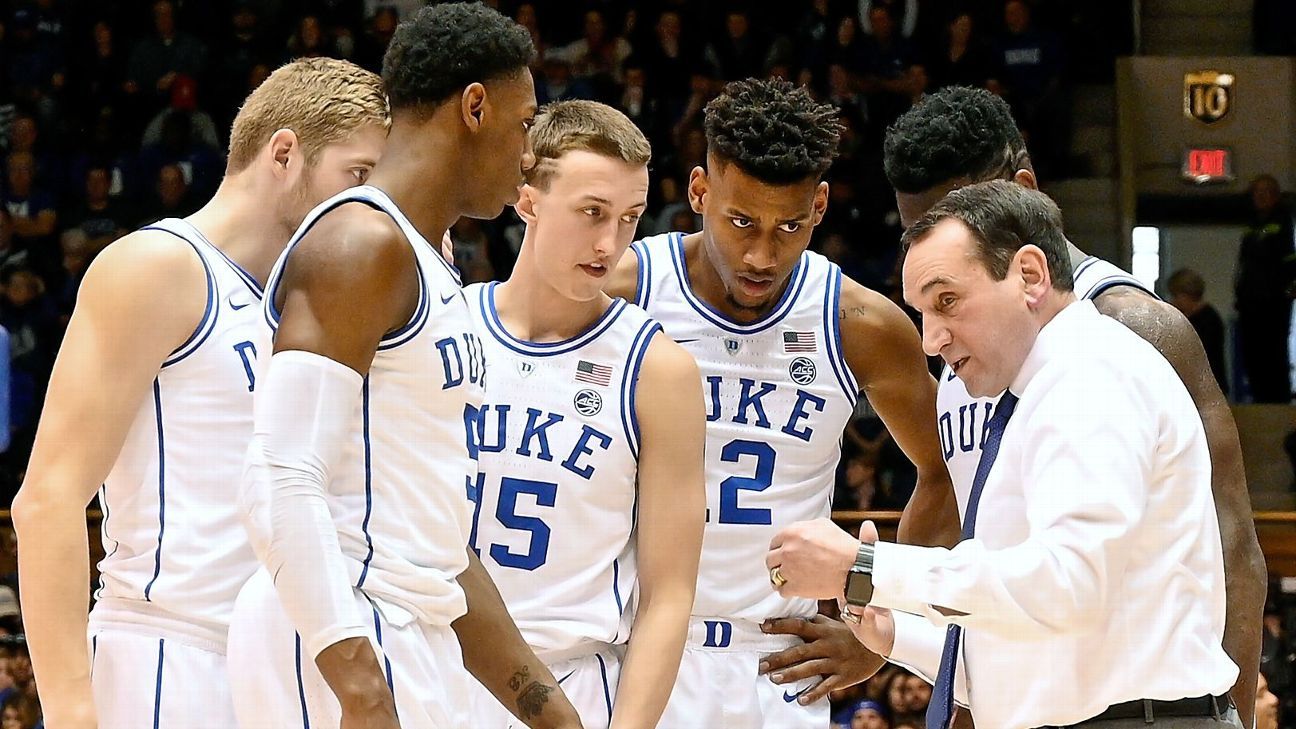 ESPN's college basketball contributors have made their Final Four and national title predictions. The ACC is well-represented.

IMO, I would make the line Gonzaga -2 or 3 vs Michigan. However, I think Gonzaga has a fairly perilous path to the Elite 8 between Cuse and FSU.

I believe Gonzaga’s length could give Michigan problems, but I agree with Reegs that it’s easy to see Gonzaga not even reaching the regional final. A Michigan-Gonzaga matchup would center around pace. My best guess is that it would end up as a slower paced Michigan-style game that Michigan would win.

In my opinion, Gonzaga would be the toughest match-up for Michigan outside of Duke. They are incredible offensively. I would argue they don’t have any weaknesses on that end and adding Killian Tillie back, if healthy, gives them more lineup flexibility and another three-point threat.

This may sound overly simplistic, but I just don’t know if Michigan could keep up offensively – and if we are being honest, that’s why Michigan lost to MSU three times.

I think Michigan’s achilles is the ball-screen with a lethal PG… that’s why we lost to state. Gonzaga thrives because of their size/front line - Clark, Tillie, and Hachimura. I think we are much better equipped to handle that because Teske, Mattews, and Livers. I know that they have some other ‘dudes’ at the guard position but I think that we are a team that actually match up well. We also have a level of D that they wont have seen since the beginning of the season. Look how well St Marys did when they got them in a rock fight.

Gonzaga is getting a lot of benefit from one early win against Duke and then playing no one in their conference season. Not saying that it wouldnt potentially be a loss but I think we would have a better than 50% chance of beating them

I definitely hear your points there. I don’t know how much you’ve seen of Gonzaga, but it completely blitzed the WCC offensively, although it is a much lesser conference. One game against St. Mary’s doesn’t really change my opinion of the Zags.

I also think Josh Perkins is underrated as a distributor and he has a wealth of experience – he’s 23, in his 5th year of college basketball, and I believe has started every game the last four years.

Admittedly, I have seen a very limited amount of Gonzaga basketball this year. I just got the impression that they out-talented most teams in the WCC. They have a lot of quality players, for sure, which is scary, but it is just an unknown to me if they can put it together against legit competition.

I guess my fingers are crossed that they have become a little soft playing against soft opponents for such a stretch.

The Zags beat Duke – early in the year, in the 3rd game in 3 days in Maui - St. Mary’s, Washington - by two, at home - and pretty much nobody else good. They’re 4-3 in barttorvik quality games. UVA is 14-3, Duke is 12-5, Michigan is 12-6. And their points per possession often falls pretty dramatically against better competition.

Sure, they’re good, but as a team to play in the E8 if we manage to get there? Sign me up.

Those stats are nice, some accurate, one not… here are a couple others:

Yes, they only beat Washington by 2 and did lose to St. Mary’s on a neutral court… they also beat St. Mary’s by 48 at home and 14 on the road a week prior to the conference championship.

You can point to the 4-3 record in Q1 games, but two of those losses are to 2 seed Tennessee and @ North Carolina – nothing to be ashamed of.

I have seen San Francisco play and they are good, particularly when Gonzaga played them (had a late season swoon). Gonzaga beat them by 30 at home and 13 on the road.

All of this is to say, yes, Gonzaga didn’t play nearly as good of competition as the Power 5 teams, but when it did, it performed well. They run really good offense, have weapons at all 5 positions, and are difficult to guard.

Michigan has lost against teams that beat them with offense. Gonzaga wins with offense. Not saying Michigan cannot win (!), just don’t love the match-up.

Those stats are nice, some accurate, one not…

Which stat is inaccurate? You may be conflating points per possession and AdjO, and arguing that the latter is more important? But AdjO can go up against good competition even if PPP goes down because of the level of competition.

The Zags’ top games were against Ill, Duke, St. Mary’s, Wash, and Creighton. While they scored a ton against Creighton, those other games represent most of their lowest PPPs of the year.

Of course it’s not surprising that even very good offenses will score less against better teams, so the AdjO might look better. In this same way, Michigan’s AdjD is even better in quality games - 83.8 vs 85.9.

And the Zags’ defense falls pretty dramatically against good competition. As for a “good matchup” - would you rather play Duke? UVA? I think they’re a fine matchup, for a 1-seed, which is what we’re talking about.

No, I wouldn’t rather play Duke, which I noted. I think UVA would be a slightly better match-up just because both teams suffocate you with defense and it would be a very low-possession, rock fight.

Hope Michigan makes it that far to see how it plays out, as well!