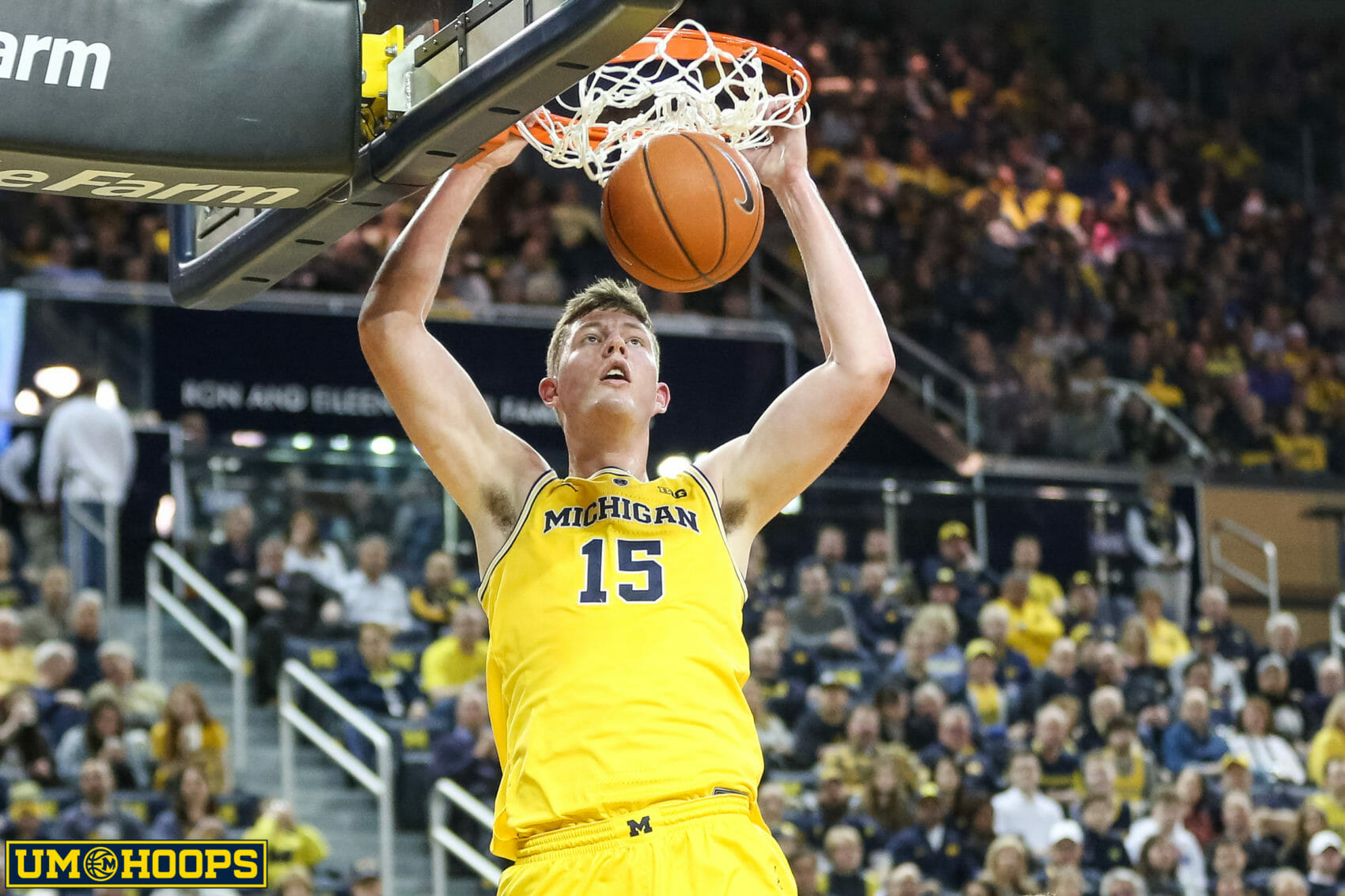 With the official start of practice quickly approaching, UM Hoops and Inside the Hall have again partnered to bring you a preseason breakdown of the top 25 players in the Big Ten for the 2019-2020 season. Our selection process involved much...

Wesson over Teske I don’t see, based on past performance OR future merit. Not sure what the criteria for selection are, but if we’re downgrading Teske based on the possibility he might struggle in the new offense. . . In John Beilein’s offense I think he might have proved the dominant big man in the conference. Do see Smith as a potential breakout star. . .

I’m not a big Wesson guy, but he’s been ridiculously productive. 15 and 7 per game last year.

Brendan and I did a pod about the list that will be dropping either Friday or Monday. The way I would put it is: If I was building a team and had to choose a center, I’d probably choose Teske. That being said, for individual honors and lists like this, Wesson is tough to knock down too far.

I have a tough time seeing Anthony Cowan, who is clearly in the top 5, being ranked ahead of either Tillman or Smith. Cowan can be a very, very good player, but he’s extremely inconsistent on a game-to-game basis, and last year, against top 50 level opponents, he was downright bad (Torvik efficiency rating = 94.3; 3 pt shooting % = 28.7; 2 pt shooting % = 39.4; T/O number = 20.3). He’s good defensively, but Tillman is better. And Smith, in his second year, has way more upside than Cowan in his fourth, and was as good and important to Maryland as a freshman as was Cowan last year.

As a general rule, I don’t comment on these rankings because they are in the eye of the beholder, but this one caught my eye. Even my older daughter, who is a rabid, and quite knowledgable, Terps fan (graduate, worked in the sports information office in college, was a moderator on Maryland’s SB Nation sports message board, lives in D.C. and goes to games), and likes Cowan a lot, was nonplussed.

Agreed. I like Teske more, but Wesson will post better numbers than him so it’s hard to put him higher on any kind of rankings list when the numbers don’t show it.

I have a tough time seeing Anthony Cowan, who is clearly in the top 5, being ranked ahead of either Tillman or Smith.

If you took Anthony Cowan off of Maryland and Xavier Tillman off of Michigan State… which team would face a bigger drop off?

I love Smith’s upside as much as anyone (probably has a good chance to be an All-Big Ten player) but I think you are downplaying how important Cowan was to Maryland.

Respectfully, Dylan, that’s not the test. Taking a PG off the floor will almost always impact a team more than a big because the ball is in his hands all the time. In Maryland’s case last year, the ONLY alternative to Cowan at the point was Ayala, who is not really a point, and was a freshman to boot. So yeah, Maryland’s numbers were better with Cowan than without, though it is worth noting again that his numbers against very good opponents were pretty dreadful. Do the numbers you cite separate out games against good opponents from those against bad ones? Cowan was terrific in games against bad teams, but Maryland would have won those games even without him.

I also don’t think it’s fair to downplay Tillman just because his team has great players like Winston and a lot of depth so it could survive in his absence. Ask the question differently–if you were a BT coach and could trade for either Cowan or Tillman, who would you trade for?

Great use of stats to back up your ranking. My only concern is that Cowan as a PG is always going to be a bigger part of the offense than a big. Tillman relies heavily on Winston to enable his performance so I guess you could downgrade him for that. But Winston’s efficiency is also boosted by Tillman converting the opportunities created for him.

I would have put Tillman ahead of Cowan but left Smith where he is.

Any chance we’ll have a guest appearance from Alex on the pod at any point?

Potentially, we haven’t really gone to having guests because then it would require digging them up more often but Brendan and I both do Alex’s pod fairly often so maybe a little reciprocal action is in store. Not for this top 25 list though, the timing didn’t work out.

I don’t think Cowan had a particularly great season last year. He struggled in top 50 games (as did another point guard in the top 5) but he was great in top 50 games the year before. He’s still hands down the most important player on the team that is projected to be the 2nd or 3rd best team in the league by just about everyone.

I think people have generally soured on him because he hasn’t turned into the player that maybe many thought he would and people always look at the Terps under Turgeon and think they underachieve. His career trajectory reminds me a bit of Derrick Walton’s as far as early role, ups and downs, etc.

As far as building a roster, it probably depends on what other PG you are dealing with. I think just about any team other than MSU, UM, OSU, Illinois, (maybe Wisconsin?) would be pretty interested in adding Cowan to their roster.

I don’t have any problem with saying Cowan should be somewhere else in the top ten. Honestly, it is Cassius Winston and 9 other guys in the top ten. No one really comes close in my opinion and whatever you want to emphasize can go a long way toward shifting those rankings.

Smith and Tillman might be way better pro prospects but potentially less important to their teams. Lamar Stevens might put up huge counting stats but lose a ton of games. There is no right answer to this stuff.

Building off of this… the reason we do these lists is to generate discussion like this so I’m definitely enjoying this.

Here’s my question for anyone who would put Tillman in the top five. What does an All Big Ten First Team season look like from Tillman? Within the scope of MSU’s team this year.

Well, if most of us agree that Teske is the superior player–and if Dylan’s job is to get beyond the obvious/measurables–I would politely beg to differ. Ordinarily I think that Dylan does precisely that, which is why all of us value the site. Not carping, because it’s fun, but I’m not seeing this one. Maybe a reminder about the criteria at the head could help us evaluate the picks more fullly.

This also raises a question: I think official practices begin soon? Wonder what you’ve been hearing out of player scrimmages, that sort of thing, Dylan?

Well, if most of us agree that Teske is the superior player–and if Dylan’s job is to get beyond the obvious/measurables–I would politely beg to differ. Ordinarily I think that Dylan does precisely that, which is why all of us value the site. Not carping, because it’s fun, but I’m not seeing this one. Maybe a reminder about the criteria at the head could help us evaluate the picks more fullly.

So this list is a composite with Inside the Hall. We both rank teams, average our ranks and then discuss any adjustments or ties that we need to settle. We both had Wesson at No. 9 in our rankings, I, personally, had Teske ranked ahead of him. They are a spot apart from each other on the list so I feel like having any sort of significant disagreement there is a bit overrated.

FWIW, Wesson will probably be on most preseason All-Big Ten First Team projections I would bet and Teske will probably be 3rd team to off. Just based on my early read of things. So I would say generally speaking we are higher on Teske and lower on Wesson, as many of you are here.

This also raises a question: I think official practices begin soon? Wonder what you’ve been hearing out of player scrimmages, that sort of thing, Dylan?

Practice starts near the end of the month. I know 7v7/ summer whispers and stuff like that is big in football, but I’m not sure there’s much to glean as far as open gym reports (especially before practice even starts). I’d be skeptical of anything I don’t see with my own two eyes.

We know who the three best players are on this team but until we see anyone else with the lights on we don’t really know what to expect.

Beilein usually let us in to watch part of a practice or two over the last few years, but no idea if we’ll have something similar this year.

Good example of what I’m talking about …

Well embedded moles in Ann Arbor are raving about the potential of Michigan freshman Franz Wagner. 6-8 wing has a chance to have a major impact following the departures of both Jordan Poole and Charles Matthews. The door is wide open.

I just am generally skeptical of most of that offseason kind of talk. Just my 2 cents.

Rothstein: jack of all obvious; master of even less.

EDIT: This is apropos of not a lot, but I was thinking today about how Teske reminds me a little bit of a slender young Lew Alcindor/Kareem Abdul-Jabbar. Different stratospheres, yes, but something a little similar in their movements. Makes me wonder whether one adaptation Teske could make to the low-post game would be to steal X’s hook shot.

You might be overweight on Jon Teske stock. Time to balance the portfolio.

Got some Teske goggles on.

I am old enough to have watched Jabbar from an early age. In fact, I might have read about him in SI as a high schooler. But. . . haven’t we sometimes speculated about Teske as an NBA prospect? When he and X were grooving high in the pick n’ roll, he has looked very very good to me. And he’s only gonna be better this year as a plus-defender and shot blocker.

Okay, yeah. The future is bright with these Teske shades.

Enjoying the discussion. To me, a first team All Big 10 performance by Tillman would include 13-15/7-8 and defense at the label of last year.