Impressive freshman stats for 6-9 Onsted freshman Ayden Davis. Plays for Family 15U, where this weekend at Run-n-Slam distinguished himself with actual rebounding effort and fundamentals at that size and age lenconnect.com/story/sports/h…
8 Likes
chezaroo May 3, 2021, 2:10pm #2

It’s hard to ignore the season the Wildcat freshman had and not just because he is 6-foot-9. Davis finished eighth in the county in scoring (15.4), second in rebounds (9.9), first in blocked shots (2.7) and first in field goal percentage, an eye-catching 68.5 percent. He also shot 60 percent from the free throw line for 14-4 Onsted and was a force on defense, helping Onsted have the lowest points-per-game allowed average in the county. Davis was honorable mention on the Division 2 All-State list. 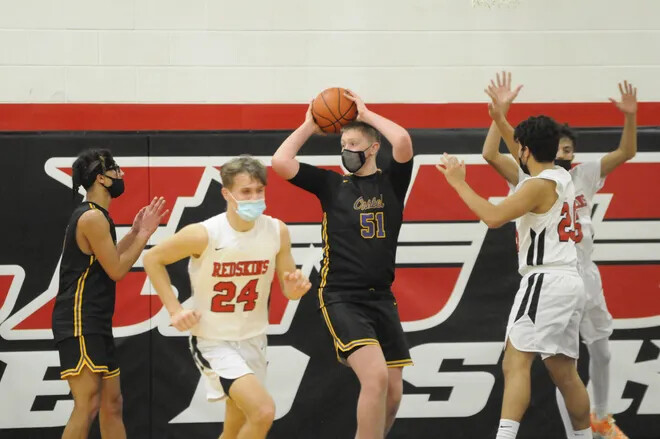 Li’l Country. Or maybe Vatican City? (It’s technically a country, and the smallest at that)

I’ll commit to this. It absolutely pops IMO

Can’t find freshman stats for his big brother, but he put up 21 and 15 (both conference leading numbers) while leading the conference in blocks as a sophomore for context, so I’m not sure he’s ahead of him even? There’s gotta be some coaches in that conference who hate that family.

I’m a fan of Li’l Country, myself.

And a whole lotta fans in the community of Onsted who LOVE that family!

I was a hard Johns over Davis backup center minutes guy, but if this kid is the same player and gets to 7 feet instead of 6’10 we’ll want him as a guy who will stay 4 years and be the backup center for the final 2.5

I am a big fan of Brandon Johns, too, and have been all along. I’m looking forward to a breakout year for him…at the four. I think we’ll be loaded up front with BJJ at the four, Dickinson at the five and Moussa backing up both spots. Will Brandon play much at the five this year? Possibly, but I think he’ll be spending most of his time at the four, which I believe, and I think the coaches do, too, is his natural position and his best position. I will trust they will do the right thing.

I very much appreciate what Austin Davis meant to our program, and I’m sure Coach Beilein and Coach Howard would be even more lavish in their praise of him than I can be. They had the privilege of coaching this young man, Beilein for three years and Howard for two. They know what he brought to the program, what he meant to the program. Did he help Michigan win games? Yes, I certainly think so, and I’m pretty sure they do, too, He helped the team win ON the floor as well as through his efforts in practice and in the locker room everyday.

Austin Davis grew up in a Michigan family, well, all except for one member of the family.

Austin loved and loves Michigan, and he fulfilled his dream of playing for the Maize 'n Blue. As a long time Michigan fan, I am so proud of what AD brought to our program, as a player, as a student, as a member of the Michigan community. He is an ambassador for Michigan and that Maize Block M is brighter for his having been here.

As a former coach, I would take an Austin Davis type player and young man any day, any year, ANYTIME. He excelled in the classroom. He was an exceptional teammate, and he was the kind of young man a coach just doesn’t have to worry about. He was selflessly dedicated to the team. All coaches want to have the privilege of coaching that kind of young man.

When his coach at Michigan asked him to start over a five star freshman at the beginning of the year, he continued to coach up that freshman, to mentor that freshman, to encourage that freshman, to help that young and very talented freshman get better. So, yes, he started, and he did his absolute best in that situation because his coach, Juwan Howard, THE Juwan Howard, big man extraordinaire, asked him to. He did his best despite, sadly, criticism from some, or at least public questioning from some, toward his coach and, I think worse, toward him. He did what he always does, he selflessly worked his tail off for his team. He’s a MICHIGAN MAN, and he will ALWAYS be one.

As for that member of the Davis family who did not grow up, at least in his early years, as a Michigan fan, well, that would be younger brother Ayden Davis. Yes, THAT Ayden Davis, the one that this thread is about. If Austin Davis, by fulfilling his dream and playing for Michigan, turned Ayden Davis into a Michigan fan, and I think he did

, and if Ayden Davis is recruited by Juwan Howard and comes to Michigan and helps our team and our program, and if he leaves his mark like his older brother did, well, that would be just one more reason I appreciate Austin Davis. I don’t live in Onsted, and the word “love” is overused these days, but like other Michigan families, the Wagner family, for instance, I “love” the Davis family, too! Go Blue!!!

I thought it was about in the middle, not the longest but certainly not the shortest!

These were thoughts I’ve had and wanted to express about Austin. As you know, I really think the world of the young man. He’s a darn good players perhaps not as quite as good as some would like, for some that would be a really high bar to hurdle. I’m not pointing at ANYONE, believe me, so I hope no one takes my comments as though I’m “criticizing” them.

You know, though, bobohle, how much I respect and admire Juwan for so many reasons. I also know, as a coach of a big time and very visible program, he lives in a fishbowl, so being questioned, even criticized at times, comes with the job, but I’m not one who will be critical of coaching decisions he makes.

I also admire our players for everything they are able to do, and as young men trying to grow and develop and be the best they can be. As a fan, I will always err on the side of lifting up our coaches and our players and pointing out the GREAT things about them. I hope this latest “book”, which became the tribute to AD that I’ve wanted to write, is a reflection of that, and is taken simply as that. Thanks for reading, man. I always appreciate you!

For all of the grief AD took around these parts for his limitations and for starting over Hunter…he was exactly the type of program guy you want using up those last couple of scholarships on the end of the bench. Sometimes I wonder what lead Beilein to even recruit him in the first place…but I’m glad he did.

Don’t forget…Austin Davis (under Juwan’s coaching) was a 68% shooter despite being 6’10" and unable to jump hardly at all. If Juwan can teach Hunter half of the post moves that Austin developed the past two years…watch out. We were amazing that Jordan Morgan converted at that rate by feasting off PnR from Morris and Burke. Davis did it almost entirely as a true post! In the B10 land of giants!

When the time comes for Ayden to pick a college, I wouldn’t mind Michigan taking him as a 3rd center that is a valuable role player later in his career.

It is up to Austin to teach his little brother some of his post moves.

Well, Austin was the number two ranked player in Michigan and runnerup Mr. Basketball to Cassius Winston. He was named Class B Player of the Year in Michigan, and he was ranked 123rd by 247’s internal rankings and 177th in the composite.

“Davis is the No. 2-ranked junior recruit in the state, behind only U-D Jesuit’s Cassius Winston. The first-team Class B all-stater averaged 26 points and 17 rebounds and scored 30 on the ACT, with a 4.1 grade-point average.”

And this, also from the Freep. “He also was heavily recruited by Wisconsin, Northwestern, Notre Dame and Michigan State. U-M’s offer was the one Davis had been hoping for.”
"I’m a Michigan kid through and through growing up, watching Michigan football play at the Big House,’’ he said. "I’ve been going to Michigan basketball games at Crisler. It’s a dream come true to play there. Just dreaming about it, being able to do this as a kid, it’s truly amazing. It’s a great school; can’t go wrong with that. I just feel really comfortable with all the coaches. I’m excited.’’

I could also put up glowing quotes from his high school coach, Brad Maska, about the kind of player and kid he was, According to his coach he was very fundamentally sound and had a tremendous work ethic. And then, again, there’s the 4.1 GPA and the 30 ACT. Austin comes from a GREAT family. That was important to Beilein and it certainly is to Juwan, too.

His mom is an elementary school principal, the kind who goes out on the playground with the students and greets kids at the door and in the hallways rather than hiding out in her office. She balances great support for her teachers and the parents of the schoolchildren and is beloved in her community. Oh, and mom and dad both played some college basketball. Mom played at Oakland for a bit and dad at Adrian. Austin really DOES sound like a Beilein recruit to me! I can definitely see why Coach B recruited AD.

I was once asked on the message board when I was supporting another player several years ago, “What are you, his uncle or something?” So, if anyone is wondering that, the answer is no, not an uncle, not related, don’t even live in Onsted. Just a guy, a guy who loves Michigan Basketball and has been a fan for DECADES, but I know it is REALLY hard to play college basketball…at any level, let alone the very highest level, at a MICHIGAN level, the level attained by Coach B and Coach Juwan. These kids (young men) work SO hard and the talent level of the kids against who they play is sometimes nothing short of amazing. And then…the whole world is watching. Well, under normal circumstances 12,000-18,000 people are in the arena watching their every move and, perhaps, millions more on TV! WOW! I appreciate everything Austin was able to do here at Michigan playing for the team that we all love! So, again, it all just comes down to being “just a guy,” a former longtime coach, a teacher, and one who loves Michigan Basketball! OK, Silverblue…out!

You are the best and very knowledgeable my friend on alot of subjects.

Beilein sometimes recruited 5s who were better offensive players than defensive players (Donnall, Ricky Doyle) and Davis was certainly good enough on O to be our backup center, probably by his junior year. The problem was on D. And who knows, maybe the younger brother has quicker feet.