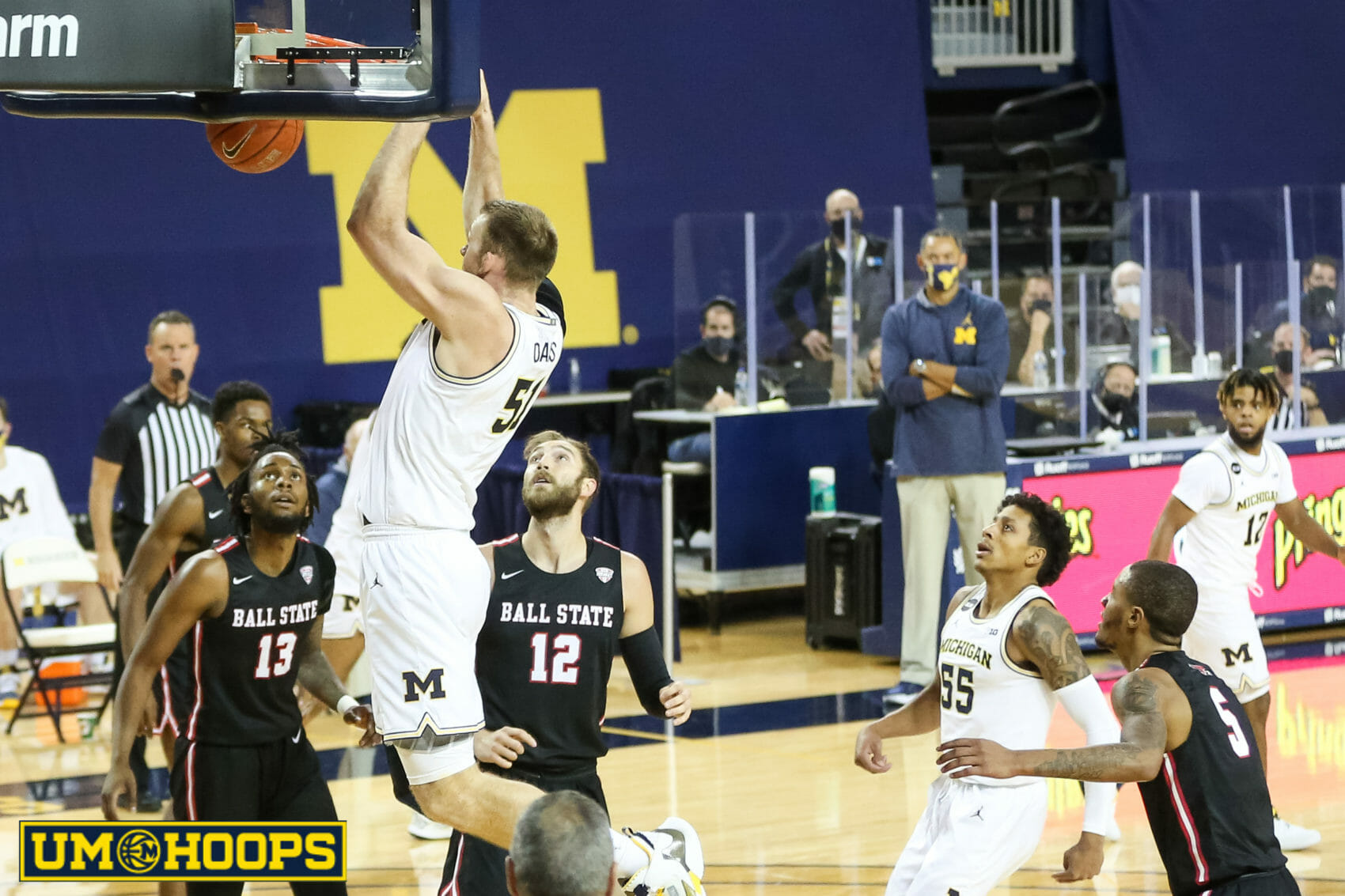 Austin Davis will be sidelined for an undetermined period of time after suffering a right foot injury against Toledo. Davis suffered a plantar fascia injury in his right foot during a non-contact movement against Toledo, per a U-M release. He...

Would’ve been nice for Johns to get more center reps against the mid majors in hindsight. Oh well.

Bummer for Davis. Thankfully we don’t play much the rest of December. Silver lining is that this forces the coaching staff to start Dickinson.

A quick google search says 9-12 weeks for recovery, but I am not a doctor and have no idea how accurate that timeline is and how it changes with severity.

Oh man. Feel terrible for the big man. Fifth year and all. That’s a painful injury. Recall Adreian Payne suffering through this some years ago.

B1G schedule appears (at least right now) to be pretty back-loaded. I guess I’d rather have him at the end than right now, if we had to choose.

I don’t want to say that “UMHoops forum coaches a basketball team” would win the national title by year 3, but I’m also not counting it out

Damn that sucks. Really feel for Davis. I’ve had plantar fasciitis before and patience is the key. I reinjured it twice trying to push myself too early and it ended up taking over 6 months to fully recover.

So it was pointed out on Reddit that the report describes a “plantar fascia injury”, which isn’t necessarily plantar fasciitis. Still not a doctor, so I don’t know whether that implies a potential quicker recovery timeline, but it’s something to note.

Yeah, Juwan said plantar fasciitis (although kind of mispronounced it) so a bit unclear what he was trying to say. 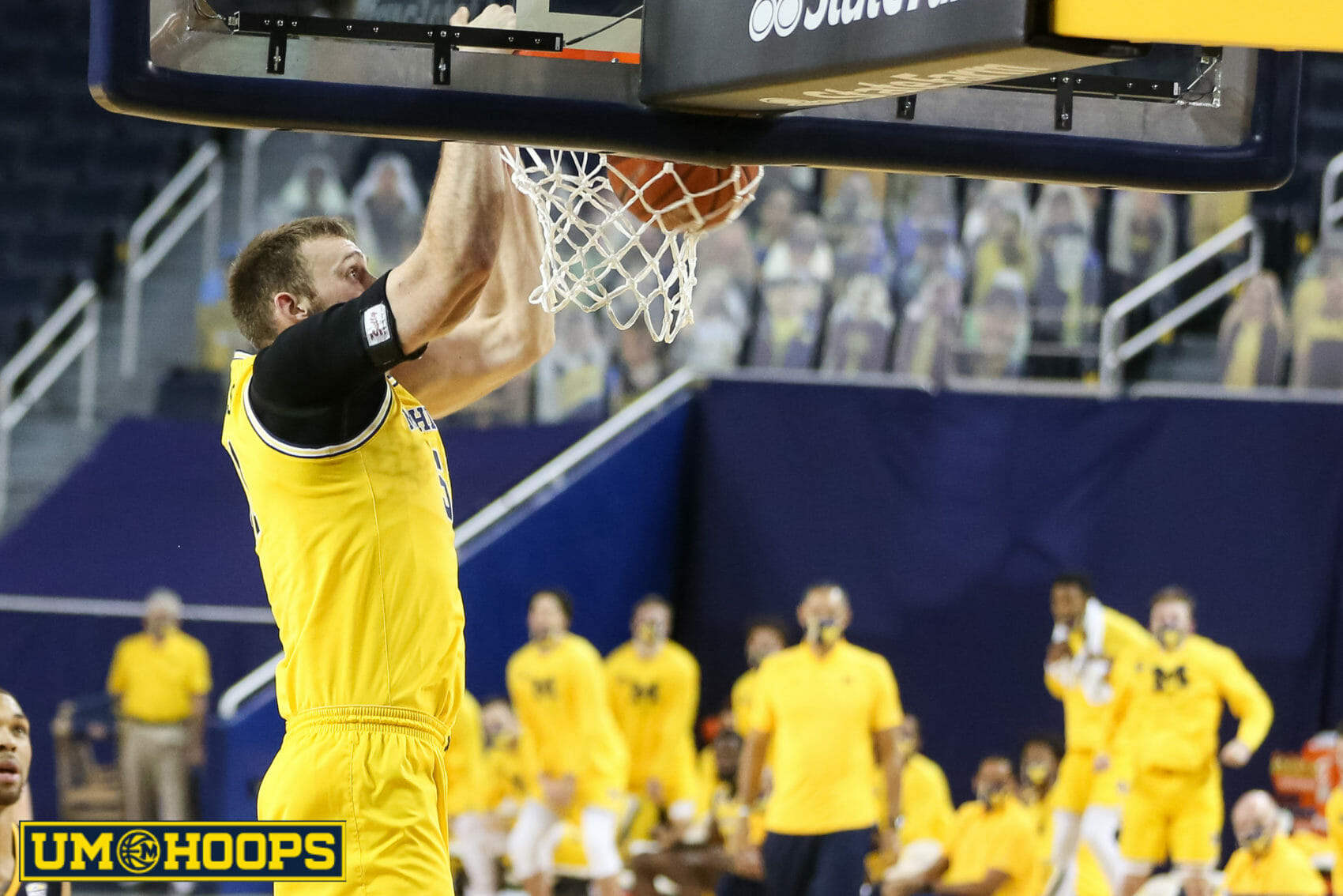 harmon, I absolutely agree with you! I think everyone on here knows how much respect I have for Austin Davis, and I feel terrible for him.

I feel bad for his teammates and the coaches, too, though, and here’s why. AD is a very important part of this basketball team. I can assure you, Juwan offered him a fifth year for a reason, and a very good one at that. Regardless of who starts or doesn’t start there are 40 minutes to be played at the five. Hunter Dickinson will now have to play 28-30 every game…in the B1G. While he’s very talented and had been impressive, that is no easy task. There are just not many freshmen at 7’1 255 who can play that many minutes, consistently game after game. AND Brandon Johns will have to play at least 10-12 minutes at the five against B1G caliber post players, and possibly more, as well. And there is really no one else…unless Jaron Faulds can help out a bit, a few minutes here, a few minutes there. Strap 'em up, fellas!

But that’s only part of the problem. One of the great advantages of having AD on the team is his ability to bang in practice against Hunter…everyday. Having a fifth grad year player who knows the B1G, who has played against B1G caliber post players, and has played against some of the very B1G post players Dickinson will face is an enormous asset. Player development for this young freshman WILL be affected. Having been in a lot of gyms and having conducted a lot of practices, I can tell you, important stuff happens there! Who on the team has the size, strength, and savvy to bang against Hunter Dickinson in practice everyday, and help him get better?

So, yeah, I feel terrible for AD, and it breaks my heart to think that he may not get to play, well, at least for SEVERAL weeks, but also I feel bad for his teammates, too. As for recovery time, he may be back by the middle or end of February. Plantar Fascia is a tough injury. He may not be back at all. So, yeah, fifth year grad student and this could be it. Let’s hope not…for AD and for the team.

Edit: OK, I just now listened to Juwan and my assessment doesn’t change. “All hands on deck.” Guess what, there isn’t an AD left on deck. We have good players and they WILL step up, we just don’t have another AD. I’m not trying to be a downer, but this kid is more important to the team than most anyone on this forum has ever given him credit for. And you heard Juwan talk about his LEADERSHIP, well he’ll still lead from the bench, he’ll be like another assistant coach, but he is so valuable in practice AND in games and he will be missed.

He can still strap a big boot on and body HD in the paint during practice. Kick him in the shins for good measure. Get him good and callused for the B1G season.

Plantar fasciitus is not fun to have and there is no predictable time frame. For those of us who have had it (or those of us who are dealing with it😥) know what a painful condition it can be. I feel really bad for AD. He will make a terrific cheerleader.

That’s too bad for Austin, but also our team. I’m probably one of the only people on here who didn’t mind him starting over Hunter and thought he brought a lot of good to our team in the limited minutes he played. I think this just means Johns will play more at center. Hope recovery goes smooth for Austin, but for now we’ll have to find a way to Make-up for his veteran presence. The good thing with Austin was we always knew we could get very solid minutes from him every night.

I disagree that you always knew you’d get good minutes from Austin Davis on any given night. That might have held true in the non conference against much smaller players but against Big Ten players I’d say his minutes are far from a guaranteed plus. Historically he’s had games where’s he’s just unplayable due to foul trouble.