A strategy question re the end of regulation against Oakland

I was talking with my brother during the timeout with 15 seconds to go, and he said “Jeff, if I was the Oakland coach, I’d foul right away and play to win with the ball in my hands at the end of regulation.” When I reminded him that we were in the double bonus, he said :“I know, and I don’t care–even, down 1 or down 2, Oakland’s best chance is to take the last shot in regulation to win it. They’re not going to win in overtime–they’re the worse team, it’s their fourth game in five days, they can’t stop Hunter Dickinson down low, and we’re finally playing to that. A defensive breakdown, a lucky shot, a lucky bounce, that’s their best option.”

As unorthodox and counterintuitive as it sounds on first blush, the more I think about it, the more I’m convinced that it’s the right play for Oakland. All of the things he mentioned before overtime were clear when the extra period rolled around. And it wasn’t as if what happened was unexpected. I know that I, and I think everyone else, absolutely wanted us to take the last shot of regulation with only a couple of seconds to go so that the worst thing which could happen was OT. As bad as we had played, I was extremely confident we would win if the game came down to five more minutes rather than a few seconds.

Same thought crossed my mind because it gives you a chance to win in regulation. However, the double-bonus really changed things a bit IMO.

I thought how Oakland played it was still smart. They were pretty aggressive in trying to blow up Michigan’s play, in part because they knew that Michigan wouldn’t attack for a quick easy basket.

Michigan’s play design wasn’t too late either, the alternative of going too early is much worse. I believe Michigan actually did go too early in a similar situation during a game last year but I don’t recall the exact game.

The only disaster in that scenario is allowing Oakland to have a chance to score.

The guide to fouling when leading (or tied) | The kenpom.com blog

Here’s a great article on that question 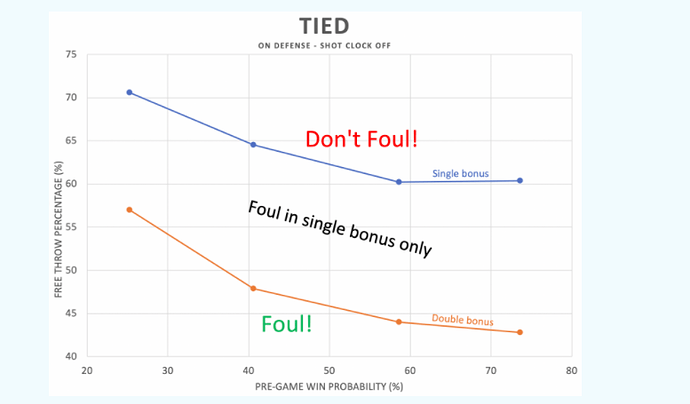 extrapolating the KenPom graph out to the pregame probability for Oakland (<20%) you’d probably need to be fouling a 65% or worse FT shooter to make it a good idea. Since Williams was not on the floor, they didn’t really have any good options to foul a bad shooter.

On the flip side I thought we waited way too long to get going. Our first move was covered and we had no time for a counter before time expired.

The way these refs were calling the game? I would have told whoever was guarding the worst foul shooter on the court (can’t remember if Williams was still in the game - probably not) to give him a light shove when he ran around a screen or stand in front of a guy and hope for a charge call but take the block call worst case. The refs were weird with how they were calling those plays so roll the dice. Maybe you get the call, maybe Michigan missed FTs, etc.

I’m impressed that more than one of us had this out-of-the-box thought in real time. It certainly didn’t cross my mind. We have a great community here.

For me, it’d be irresponsible for a coach to ever intentionally turn a tie game into a trailing situation in the final minute. I could never do it. But, it is quite a thought.

I don’t think you foul there unless you got someone who is clearly in their own head like Willams at that moment. Then I see the logic and think it maybe worth a shot.

On Williams I think he’s overexcited right now and the adrenaline is causing him to miss ft and Outside shots that he can easily make.

I feel like you see that with a lot of young guys stepping up to a higher level and they miss deep or just badly in general.

Anyone who had even played in high school has had this moments where your way too hyped and a shot that feels good on release goes 8 feet over the hoop or only hits glass.

I trust he will start hitting them and then start getting comfortable facing up from deep.

Interesting discussion. I would’ve been terrified if Oakland had a possession with the last shot, even if Michigan was up 2.

I also don’t think Michigan got into their offense too late. While the possession overall was bad, at least that shot didn’t come with 8 seconds on the clock giving OU a chance. OT was always going to be a major advantage for Michigan.

I also don’t think Michigan got into their offense too late. While the possession overall was bad, at least that shot didn’t come with 8 seconds on the clock giving OU a chance. OT was always going to be a major advantage for Michigan.

Yeah they should have gone for it, IMO. Huge underdogs in OT, a playmaker with the ball who has the quickness to draw a double or get off a decent look off the dribble and the ability to put a freshman or someone having a rough shooting night (was Brown on the court?) on the line.

Wasn’t a potential strategy today. Lost by 43 at Mackey.

If there was any doubt (there wasn’t), Michigan’s game on Sunday was about Michigan playing horribly not Oakland potentially being better than they looked in the first week of the season.