Because a guy who can’t shoot or run an offense is really going to help on a night where you shoot 20%.

It was a bad game for everyone, including MAAR.

Same thing as just about everyone else.

Absolutely, mentality is a big part of it. If they deny the pass, punish them for it inside. Don’t back off and try to reset. Such a conservative mentality and it won’t win games against aggressive defenses.

I do think that having athletic, explosive shot-creators and physical bigs would also help.

No idea why we didn’t see that Irvin yesterday. He can obviously do it.

We saw a rare defense yesterday, very few teams have the players to play that way for the majority of a basketball game. I think our bigs played a decent game. Our guards continuously put our bigs in bad spots IMO. Wagner looked completely lost on offense and there’s no excuse for that. When screens were set, our guards kept backing up instead of attacking. Attacking is how you beat an aggressive defense and we absolutely did not do that.

A more experienced Xavier Simpson would have been a major weapon against the D SC deployed yesterday. My god, if you’re a guard, SC was begging you to take it to the rim. Walton clearly not comfortable with this but MAAR and Simpson should find this right in their wheelhouse. Disappointing game for the guards to say the least. I think Simpson will salivate at these type defenses as he gets comfortable with the offense. If Simpson is nothing else, he is quick, and a frightening proposition to stay in front of in one on one situations.
On a side note, I think Brooks and Poole will be effective in these situations as well, probably Matthews too

So I work nights and i somehow over slept and missed the game. I’m a good luck charm so that is the number one reason we lost. Just putting that out there.

Seriously though reading all the in game posts and commentary coupled with the post game stats and game reviews I feel like I can picture exactly what happened. It’s sad too. Hope this is anomaly.

A lot of what I hear you guys saying about Irvin drives me nuts. He’s a very frustrating player imo. He really needs to improve on his decision making and shot selection for us to max out potential. I keep saying that we have to spread the touches and looks. Also we can’t just chuck threes all day, they’re not good enough shooters., gotta get the bigs looks. Let’s hope they get back to playing the right way. They can do it.

Ibi got in for a cameo 2+ minutes while Simpson played 8.
X scratched with a 1/2 effort at the line.

He didn’t trust Caris or Dawkins or Spike or (insert names of various other young players here) early in the season and then Caris was playing big in the NCAA tourney run and Dawkins was one of our leading scorers down the stretch.

He’s done it before and he’ll do it if they’re good enough. We’re 5 games in. Rotation still working itself out.

He said that last night. He’s looking for them to be contributing in a month or so.

Coach Beilein acknowledged in post game pressed it will be a difficult season if he doesn’t develop Simpson and Watson. You should watch presser.

Will all know they need to develop, but will that happen in time to impact this years team? If they can’t get any run against St Mary’s after 8 weeks of practice is it reasonable to think with more games and less practice/instruction time they will take an in season leap?

Dawkins did, even before Walton and LeVert went out for the season. MAAR did and played pretty well after the injuries. LeVert did. Wagner did last year at almost exactly this point of the season before sliding back into non-play status.

I’m going to wait until I watch the 3 post-UCLA games against lesser opponents before I draw even preliminary conclusions. If they’re still playing light minutes then, it will be tougher, though not impossible. FWIW, I think Simpson looked significantly better last night, and might have played a lot more minutes had he not committed the frustration shove on the inbounds pass after Junior Robinson beat him off the dribble which got him yanked.

More than anything Beilein doesn’t trust them with the defensive rotations. Very skeptical that works itself out in time for either to see impactful minutes THIS season.

Barring unpredictable catastrophic injury to a starter, hard to envision either having a real effect on THIS years squad.

A lot of people thought X was college ready to contribute from day 1 because of HS hyperbole. Not so much as it turns out.

Remains to be seen what is legitimately his ceiling as his career takes shape. WAY to early to write him off, but the majority of this board thought he’d be solidly entrenched as a rotation player by now. Especially when it’s well known Walton needs less minutes to remain fresh. Surprising how limited his minutes have been so far.

Hasn’t Beilein mostly praised x’s defense? Or is that just his on the ball d?

On offense I like what I see from him too, he’s quick and penetrating in a way Walton (or MAAR) is not. He just isn’t recognizing what he’s creating, whether it’s a floater for himself or a feed elsewhere. Happens when you no longer are ‘the man.’ I think we would be ok if he had to play more.

This team is so odd. 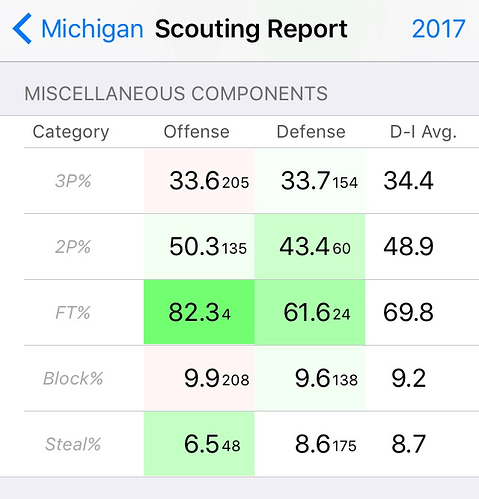