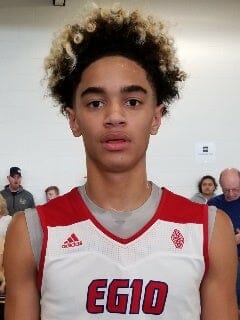 Khristian Lander is a 6-foot-2, 170-pound Point Guard from Evansville, IN.

Brian Snow from 247 identified this kid as someone Michigan has recently reached out to. Apparently, he grew up a Michigan fan. 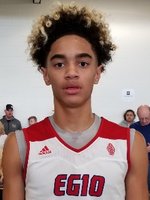 Khristian Lander is a 5-11, 150-pound Point Guard from Evansville, IN.

I find it funny and also very helpful that kids being recruited now “grew up” with Beilein having success at Michigan. 2021 kids would have been roughly 10-11 years old for the 2012-13 season, and then obviously playing AAU and high school ball over the past two seasons. Crazy to think.

Does anyone in this forum know the Lander Family personally? Just wondering if anyone knows if the parents themselves are fans or any other inside info.

Nothing super relevant but Lander posted this video 13 days ago. Wearing a Michigan shirt clear as day in both videos. Also, this is my 3rd straight post in this thread so hopefully someone can comment on it

He’s a sight for sore (shooting, 1v1) eyes. Short clips, but seems to have the tools that we need right now.

Yeah I thought the same thing. He looks bigger than 5’11

6’2 is what I’ve been reading is his current height.

Some pretty solid measurements for the in state 2021s as well as Michigan targets. Lander’s size as a PG I really like.

Khristian Lander mentions he has spoken to Juwan and he reminds him of Deangelo Russell. First contact I’ve heard about since the coaching change.

Good. This is a player Howard should go full out for.

No mention of Michigan which is a bit disappointing imo. I have a friend who’s connected with the hoops in the same town as Lander and is really close with him. He says Lander and his family are huge Michigan fans. He said he’d be very attainable if Michigan goes for him hard. Hopefully they prioritize him. He’s arguably the top PG in the 2021 class. His most recent favorite is Juwan’s tweet welcoming the 4 new staff additions as well.

Yeah Juwan seems to be prioritizing other 2021 guards, but it may be better to focus on players who have a pre-existing connection/affinity for the University. It’s easier to recruit those types and obviously Lander is a high level talent.

My buddy told me Lander loves Michigan. He said they’d be a pretty safe bet to land him if they really prioritize him. Logistically it’s not terrible either. I mean it’s down by Louisville at Indiana’s southern most border but it’s closer than a lot of the other top prospects in 20 and 21 Michigan has begun recruiting. Kid can shoot, is a blur with the ball, extremely athletic and has really good size at 6’2 for a PG. I think he’s a solid playmaker as well. He’d pair great alongside say a Max Christie imo. Indiana Elite is a very structured AAU program that has more X and Os than most major AAU programs. He ran that team successfully this year playing a grade up. He’s a guy who wants to be at Michigan. I think that would be a easy reason to recruit him for most schools if a kid really wanted to be there and was a 5* caliber player. But if Juwan and staff are confident of landing a guy like Kennedy Chandler or Cam Hayes and do it would all work out so it would be good. I just think Lander is a player Michigan has a better chance if landing and he fits the profile of what the staff is now going for, which is elite talent.

The only potential issue I see is that we have Zeb Jackson in the 2020 class and presumably Jett Howard in 2022, so maybe there’s a concern about recruiting point guards in three straight classes. But, given how early kids leave these days, I’d take him and worry about that issue later.

Jett Howard is not a point guard. While I don’t think it would be bad to prioritize Lander, I don’t really think it is fair to describe his recruitment as a layup just because some people in his family are Michigan fans.